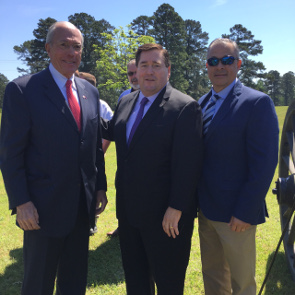 Last Friday morning Louisiana Lt. Governor Billy Nungesser joined with the Civil War Trust and Cleco to announce the permanent protection of 14.5 acres at the Mansfield battlefield in DeSoto Parish. At the Battle of Mansfield, fought April 8, 1864, an outnumbered army of Confederate soldiers from Texas and Louisiana defeated Union troops under Maj. Gen. Nathaniel Banks. The 4,400 casualties convinced Banks he could not wrest Louisiana and Texas from Confederate control.

“Through concerted efforts to protect the state’s battlefields and other historic treasures, this administration and its partners are creating a lasting legacy for present and future Louisianans,” said Lt. Governor Nungesser. “We will continue to work with nonprofit groups like the Civil War Trust and preservation-minded organizations like Cleco to proactively conserve these irreplaceable resources.”

According to a report commissioned by Congress assessing the nation’s Civil War battlefields, Mansfield had a “direct impact on the course of the war,” a selective designation placing it on par with more famous battlefields such as Gettysburg and Antietam. The property – a donation from Cleco – is the first parcel ever preserved associated with final phase of the Battle of Mansfield. The tract will ultimately be transferred to Mansfield State Historic Site.

Mansfield State Historic Site highlights both the Battle of Mansfield and the Battle of Pleasant Hill, through interpretive programming and special events. The site is located on La. Hwy. 175, three miles south of Mansfield. For more information, visit http://www.LaStateParks.com.